Sally studied Art at Trent, Nottingham, graduating with a BA (hons) in Textile Design. She then went on to do a Post Graduate Certificate in Education at Leeds before teaching Art to A' level for several years, then leaving the profession to start a family.

Like some other small businesses Sally's work as a Pet Portrait Artist began almost by accident. Her husband, when they first met in 1991, asked her to draw something for a picture frame he had and she drew his dog, Carrie. Friends who saw the portrait asked for a portrait of their own pets and by the time Sally gave up her job as Head of Art at Lime House School in 1993, she was already taking commissions at local shows.

Since 2002, with both children in school, she has worked full time as a Pet Portrait Artist. She also draws people and produces life-like pictures of people with their pets. Numerous other animal portraits include farm animals, small pets, birds and even a tortoises and reptiles.

Exciting projects have included a series of Sally's dog portraits being used by the New Zealand Mint on Commemorative Coins to mark the Chinese Year of the Dog.

She was also commissioned by RSPCA Freedom Food to undertake a series of Farm Animal Portraits to mark the 15th anniversary of the Freedom Food scheme.

The producers of ITV's "60 Minute Makeover" commissioned Sally to produce a pet portrait of Alfie the Schnauzer for a house makeover in Hailsham.

Sally was interviewed by The Guardian newspaper for an article based on the success of her online business and was filmed in her studio for a BBC2 TV series "Get Webwise for Business".

A group of her clients were interviewed by the Daily Mail and featured alongside their dogs and portraits in a double page spread.

Sally was delighted to be nominated for the Excellence in Cumbria Awards as runner-up in the category 'Business Woman of the Year'.

Sally's pet portraits have become treasured family heirlooms for many people, a lot of whom return often for more portraits. Her work is delicate and sensitive. Her eye for detail allows her to create an excellent likeness, capturing the spirit of her subjects.

For Sally customer satisfaction is paramount. 'it is very emotional seeing the joy that a portrait can give, people really do love their pets', she says. "I have often seen clients with tears in their eyes when they see the likeness. It's rewarding to know I've got it right.' Looking through Sally's on-line feedback, the words "captured" and "likeness" and "absolutely" appear frequently.

A portrait starts with drawing the eyes, as Sally explains, "It's important to get eyes just right. I usually start with a rough outline of the head and then work from the eyes outwards. Eyes really are the windows to the soul" she says.

Sally, whose own much-loved dog Roxy still has pride of place in her lounge, has been taking commissions for over 30 years and now has one of the largest online galleries of hand drawn Pet Portraits in the world.

(Adapted from an article for the Cumberland and Westmorland, written by Fi Exon)

Watch as Sally Logue draws a portrait of a clients boxer dog, your’s could be next! 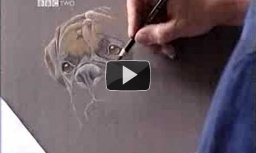 “ Oh Sally, you have captured his personality to a tee! It’s truly wonderful and Jade will love it, thank you. ”

Read the latest customer comments from some of Sally’s 1500 happy clients.

Orders are now being taken for Pet Portraits to be completed for Christmas 2022. The waiting list is usually 6-8 weeks, but priority can often be given for special occasions, please ask. If you've left it too late for a Birthdays or Anniversary Gift Vouchers are always available.